How a players association helped win the World Cup

It was one of many unprecedented and bold moves by Rassie Erasmus.

The South African boss announced last April that the head of the country’s players association, Eugene Henning, would accompany the squad to Japan.

“He’ll look after the players’ welfare and check things like workload, who needs time off, and so on,” said the Springbok supremo at the time.

“If we want them to be focused, well-conditioned, fresh and ready for the World Cup then we have to look at how we manage their individual work-loads. And by workload I just don’t mean training and playing time – those are obviously the main activities items for a player – but we know it takes more than that to be successful on the pitch,” he added.

It was something that certain teams wouldn’t have done and most of the rest wouldn’t even have considered.

Henning is the CEO of MyPlayers, a former lawyer and image rights specialist…and advocate of putting players first.

Eugene Henning, the CEO of MyPlayers (the players’ rep body), has been seconded to the Springboks for the 2019 international season, joining the team management until the end of the Rugby World Cup in Japan.
Read the full article: https://t.co/CqlheuCcDF pic.twitter.com/of25Ur48X8

“Players are your most important asset and I think you need to turn every stone to make sure that the asset performs optimally,” said the 41-year-old.

“You won’t make a mistake by doing everything possible to look after your player’s welfare.”

So far, so well-intentioned. But how much of a factor in winning the Webb Ellis Trophy did it become?

“The feeling I got is that the coaching team were extremely concerned and proactive about player welfare from day one when they started talking to us.

“The guys were in camp for 20 to 21 weeks and that’s a long time. The sense I got was that they wanted to manage these guys as well as possible in terms of player welfare and load. For me, it was never necessary to go to Rassie and say that you have to do X,Y and Z with Player X, but we had such an open door relationship regarding information, so I would give him information and he would make decisions based on that,” said Henning.

“The rules of the environment were very important to make sure that they cater for human beings who were away from home for 20 weeks.

“Management must be sensitive towards the human element and I think by having someone there who looks after the player affairs, you force yourself to have those discussions.” 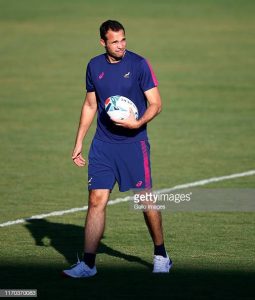 With the celebrations at an end and life starting to return to normal, Henning took time during the Players Podcast interview to reflect on a once-in-a-lifetime experience.

“Someone said to me before that there’s no money in the world that can buy you that privilege and experience. It’s something I’ll cherish for the rest of my life. It was tough at times…but the people around us were great at lifting everyone. I guess that’s where it becomes a team.”

Now that he’s back to the day job at MyPlayers in Cape Town, what does Henning believe the future holds for South African Rugby?

A great move by @Springboks to include their Players Assoc boss Eugene in their RWC camp. Results speak for themselves. Well worth a listen. #PlayersFirst https://t.co/g26Kb3WgKp

“We can’t fool ourselves; our vitals are still not where it should be. That’s our view as a player’s association.

“In terms of governance we’ve got some work to do, on a financial level, our succession planning and our performance in Super Rugby is not what it should be and how we work with schools rugby in South Africa is something we could work on.

“So in terms of our vitals, I don’t think we are close to where we should be as an industry, and if we’re going to fool ourselves that we are by winning the World Cup, then this World Cup could be a disaster for us.

“But if we say that this is a great moment and we have a platform to kick on…then I think it’s brilliant. But we shouldn’t fool ourselves.”

We shall watch with interest.

Check out the Players Podcast on SoundCloud above or on Spotify now! You can also check out more about Eugene and MyPlayers on their website.