Following our men’s sevens and women’s surveys earlier in 2018, the third report of the year was carried out among men’s international 15s players.

One of the hottest topics in the game right now, player load is defined as the amount of work a professional player has to do. This includes everything from game time, the amount of training, pre-hab and rehab sessions, gym work, game analysis and learning tactics, travel, media duties and appearances. Load can also include if a player is studying or has young children or commitments outside of Rugby.

This survey mainly looked at physical and mental load and some of the other factors that can affect performance.

Overall player load at the international level seems to be well managed with 46% of players strongly agreeing when asked “does your national team manage your overall physical load satisfactorily while you are in the national team environment?”

35% said they “somewhat agree” while the remaining 19% said they either disagreed or didn’t have a strong opinion. 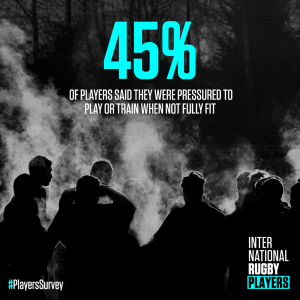 When asked “Does your club team(s) manage your overall physical load satisfactorily while you are in the club team environment?” there was a drop in those in agreement; only 31% felt strongly that their club managed their load well, 37% “somewhat agreed” while 32% disagreed or “neither agreed or disagreed”.

When asked how many matches they played in the last 12 months, 35% said they played between 21 and 25, which was also the number of matches players said believed was the “optimum amount” per season.

However, when broken down, more tier one players (31%) took part in 26-30 matches in the last year and 16% of players at the top level played 31 or more matches.

Elsewhere, over half (54%) of international players believe tests should NOT be played outside official test windows.

While 47% of players said they missed between 1 and 5 matches last year due to injury, one-third of those surveyed missed six or more games. The number of players who missed 11 or more games was higher in Tier one squads (19%) compared to 10% at tier two level. 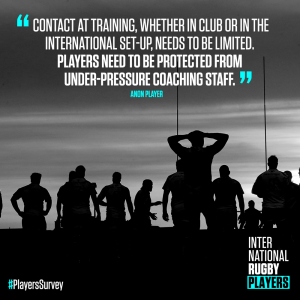 Outside of games played, 56% of players feel that training (26%) and lack of recovery time (30%) have the most impact on physical load in a season. With other studies showing that training accounts for approximately 85% of a player’s workload, it was interesting to note that, outside of games played, the majority of tier two players highlighted “lack of recovery time” as a significant contributor to their overall load.

Mental Load also can have a significant impact of player performance throughout the year.

Players said that injury (21%) is the biggest mental drain, followed by financial matters (18%) and Rugby learning (tactics and analysis etc) at 16%.

Highlighting the split between the between tiers one and two, financial matters and personal development were of more concern to players in tier two and emerging nations.

Players were asked what category of players they thought were more at risk from being overburdened during a season.

Over half (54%) felt that international starting players were at risk of overload, however 40 percent of Tier 1 players think that fringe players, who often jump between club and country, can be at risk of injury and overloading.

When asked if “you’ve ever felt pressured by team coaches or staff to train or play when not fully fit?” 45% said they had, with the numbers equally split between tier one and tier two sides. Among Emerging nations, 54% of players said they had felt pressured to get on the pitch when carrying injuries.

Several players also remarked about contact sessions at training. “Contact at training whether in club or international set up needs to be limited. There is enough contact week to week in games so I don’t see why there is any in training. Players need to be protected from under pressure coaching staff,” said one respondent.

TODAY WE UNVEIL THE RESULTS OF OUR GLOBAL PLAYER SURVEY

Players from 24 nations gave us a picture of the realities of the modern game.

Concussion and the management of head injuries has been one of the most talked-about areas of the game and players had their opportunity to answer questions on the Head Injury Assessment (HIA) and Return to Play Protocols.

The vast majority of players (85%) think medical staff are following the Head Injury Assessment to the letter of the law. While 72% of players say they have never hidden a head knock in order to start the Return to Play Protocol, players raised concerns about the stand down period and whether decisions should be taken out of the players’ hands in more competitions and tournaments.

International Rugby Players board member, Rob Nichol (NZ) said: “The fact that some players (28%) felt the need hide symptoms of a head knock so that they can start the return to play protocols, means authorities have to take the decisions out of the hands of players.”

International Rugby Players strongly believes that to play for one’s country is the right of every player and sees the international game as the cornerstone of Rugby, from which the game can build.

In recent years, as the game has become more professional, Players Associations have been made aware anecdotally of instances where players have been pressured into staying with their clubs to the detriment of their country. 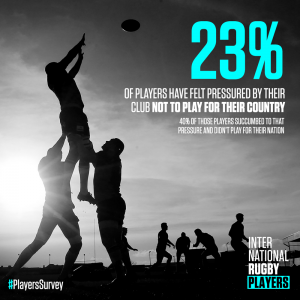 Asked whether “you have felt pressured by your club NOT to play for your country” 23% of players said they had felt this pressure, with 40% of these succumbing to the pressure and not turning out for their country.

Looking at the breakdown, only 7% of Tier one players said this was an issue while it was a factor for 37% percent of Tier 2 professionals.

Player Development Manager with Pacific Rugby Players, Joe Rokocoko said: “We know from our work with PRP that some guys have been put under pressure to stay with their clubs instead of playing with their national side”

“The survey results show how bad it can get sometimes. There’s a lot of work we need to do to make sure players are able to play at the pinnacle of the sport, which is for their country, and that the integrity of the game is upheld.”

In the interest of growing the international game and bringing on teams in the “tier two” and “emerging nations” categories, International Rugby Players as a representative body believes all nations should have the benefit of global minimum standards, something the vast majority (86%) of those surveyed agree with.

Overall, 32% of players say their pay “significantly increases” by playing for their country, with 30% saying their remuneration “slightly increases”.

However, while almost half of Tier one players say their pay “significantly increases”, only 21% of Tier two players agree can say the same when they tog-out for their national team.

On the other hand, 20% of those surveyed said their pay “slightly” or “significantly” decreases when they play at the international level, the majority of those in the emerging nations.* 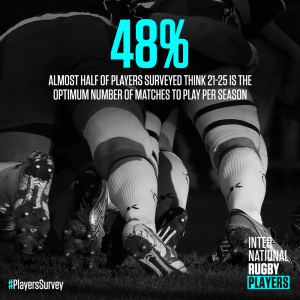 International Rugby Players CEO Omar Hassanein said: “Firstly, I’d like to thank all our members who took the time to complete this survey. The feedback from all 24 nations was incredible and shows the passion of players who want their voices to be heard and issues to be highlighted.

“What’s become evident is that player welfare can’t be just talked about, it needs to be acted upon. As an example, too many players are highlighting player load and talking about being overburdened in training or playing too many matches.

“This survey has highlighted many important areas of work and we will be progressing these with World Rugby and the other governing bodies in 2019 and beyond, including the ongoing work of the Player Load working group.” 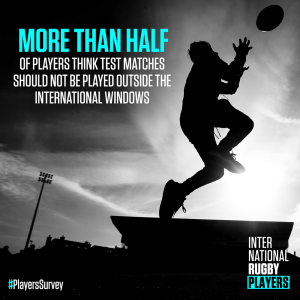 *For the purposes of this survey, Tier 1 nations are all teams competing in the 6 Nations and Rugby Championship. Tier 2 countries are Canada, USA, Fiji, Tonga, Samoa, Japan, Georgia, Romania and Russia while Germany, Hong Kong, Kenya, Namibia and Uruguay are classed as Emerging Nations.

For more  on this, make sure to check out our friends at Rugby World magazine who have a full breakdown of the survey in their latest issue of the magazine – on sale now!