Sometimes it’s better to be lucky than good.

Not only did DeMaurice Smith, Executive Director of the NFL Players Association, get a Collective Bargaining Agreement (CBA) over the line, but he did so in March before the world – in particular the world of sport – shut down.

The deal, which was raked over by players, owners and the American sports media in the last year, will see the season move from 16 to 17 games per season but players will have a greater share in revenue and will see an improvement in many of terms and conditions.

In Episode 18 of the Players Podcast with Eoin McHugh, the NFL Players’ boss, a former trial lawyer, talks about negotiating one of the most high-pressure deals in sport and how it’s one of the most stressful deals he’s ever done.

Smith, 56, talked about the resistance from some players to adding an extra game to the season, the impact of social media on the deal and how players were split on other aspects of the CBA. 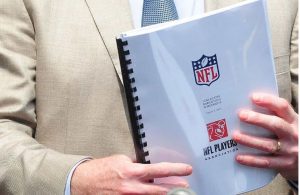 He also talked about the impact of politics and culture on his job, highlighted by the Colin Kaepernick and the National Anthem controversy, how, in the early days, some players fought him on concussion protocols and how the game could be impacted by the Covid-19 pandemic.

Check it out now!