A range of player appointments to new World Rugby decision-making groups has been welcomed as a step in the right direction for the global game.

International Rugby Players has made 14 appointments to different boards and committees, aimed at giving players a greater voice in the professional game.

Players were appointed by the global representative body with the view to combining direct rugby experience with various areas of expertise.

Among the player appointments, backgrounds exist in legal, medical, high performance, broadcast, digital media and other areas – all set to benefit World Rugby’s decision-making process on a number of levels. 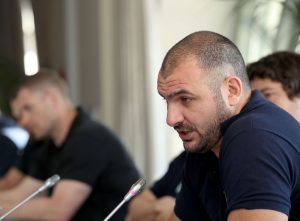 Chief Executive Omar Hassanein said: “The players we’ve put forward for the board of Rugby World Cup Ltd., and the various committees will better equip World Rugby to make the right decisions for the game on a consistent basis. They each possess a unique combination of business and practical rugby understanding which all stakeholders are starting to recognise as essential to have at the table.

“From an International Rugby Players perspective, we are pleased that World Rugby has recognised and acknowledged this value, with these committee appointments forming one aspect of a greater commitment to putting players at the centre of the game’’

Among the appointments, Brian O’Driscoll and Melodie Robinson will join the board of Rugby World Cup Ltd while Bryan Habana, Conrad Smith, Rachael Burford, Jamie Roberts, and Dr. Araba Chinto join the newly formed High-Performance Rugby Committee alongside some of the world’s top coaches.

“A step in the right direction for the game”

Today we announce a range of player appointments to new World Rugby decision-making groups, aimed at giving players a greater voice in the professional game.

The Sevens Strategy group will benefit from the experience of former player Josh Blackie and the medical experience of Dr.Sharron Flahive while Sene Naoupu takes over from Rachael Burford on the Women’s Advisory Committee. Italy’s Leonardo Ghiraldini will join USA’s Kate Zackary on the Anti-Doping Advisory committee.

Melodie Robinson said: “I’m excited to be the International Rugby Players representative on the Rugby World Cup Limited Board alongside Brian and I’m extremely optimistic that bringing the players’ interests to the table around decisions for Rugby World Cups will have extremely positive knock-on effects for teams and players.

“While a massive piece of work is the landmark future host awarding process for the men’s and women’s Rugby World Cup, personally I’m excited that there is also a focus on the broadcast rights and commercialising the women’s Rugby World Cup, shaping it so that it attracts even more players, new fans and big sponsors which then has a knock on effect for all women’s competitions.”

The positions will be officially confirmed after a governance review by World Rugby is complete.