With pre-season underway in the North, Super Rugby coming to an end in the South and plenty happening elsewhere in the world of rugby, it’s time to look back on the week that was.

Player Load was front and centre this week, as the International Rugby Players / World Rugby working group met again to discuss managing the amount of games, training and “load” players are subjected to.

The group is made up of current and former players, coaches, World Rugby execs and some of the top medics in sport who are discussing the best way to deal with the amount of games and training professional players deal with.

With our own Conrad Smith stressing the importance of a player’s voice in the debate, Welsh centre Jamie Roberts, himself a qualified doctor, also spoke to us about the importance of minimising the risk of injury in the game.

A lot done, more to do. Watch this space.

Livin’ in the Hall of Fame

The inductees, as announced on the governing body’s website, are: Ireland’s Ronan O’Gara, Australia’s Stephen Larkham (below), the first Polynesian player to represent the All Blacks, Bryan Williams, former French “total rugby” coach Pierre Villepreux and Welsh legend Liza “Bird” Burgess, who captained her country in their very first international, in 1987 against England. 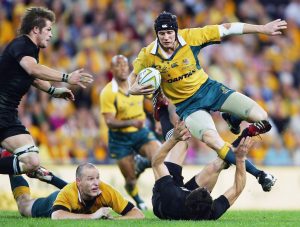 On the subject of Women’s Rugby, Australia this week launched their bid to host Women’s Rugby World Cup 2021.

Backed by a $5 million commitment from the Government of New South Wales, the tournament, if selected by World Rugby, would be hosted in Newcastle and the Hunter region. It’s believed Australia will be going up against neighbours New Zealand to host the event, along with Wales, France and England.

The past few years has seen an explosion in women’s sport in Australia, after the Women’s Sevens team won gold at the Rio Olympics in 2016.

The Canterbury team beat the Lions, 37-18, in Christchurch with coach Scott Robertson celebrating the only way he knows how. (see below)

The top players don’t have much time to celebrate however, with Australia v New Zealand kicking off The Rugby Championship next Saturday.

Love how Canterbury Crusaders coach Scott Robertson celebrates with a break dance when his team wins a comp pic.twitter.com/G4MIWQX5C9

And finally, we send our very best to Ross Xenos who stepped down as Chief Executive of the Rugby Union Players Association (RUPA) in Australia today.

Ross, who’s been at RUPA for over seven years and served as CEO for over three, is leaving the organisation in a great place, having successfully negotiated a landmark Collective Bargaining Agreement (CBA) with Rugby Australia late last year and managed his organisation through some tough times in Aussie Rugby.

Ross also sat on the board at International Rugby Players. He moves on to the next chapter of his career with the Melbourne Rebels.