Rokocoko to work with Pacific players in France

Former All Black Joe Rokocoko is one of three new Player Relationship Managers who will work with Pacific Players in Europe.

The Fijian born winger and centre is among a team of three who will assist the careers and lives of players from Fiji, Tonga and Samoa plying their trade in England and France.

Rokocoko, who will take on the role outside of his obligations with Racing 92 in Paris, will work with players in France alongside Marion Salvaudon, while former Bristol center Junior Fatiolofa will be based with Pacific players in England.

Player Relationship Managers (PRMs) are responsible for supporting Pacific Islanders playing in clubs and competitions throughout Europe. As well as assisting players adjust to life abroad, PRMs strengthen connections with local rugby organisations including the Rugby Players Association (RPA) in England and Provale (France) to help players establish successful careers away from rugby and navigate the many issues that arise while living and playing abroad.

Today’s announcement follows on from a Memorandum of Association (MoU) signed with the RPA and Provale last year.

Rokocoko said he’s excited to have the opportunity to give back to Pacific Island rugby by supporting those who are entering the French rugby scene for the first time.

“My family and I know first-hand the challenges and opportunities that arise when you arrive in a new country to play rugby professionally,” he said.

“It’s a privilege to pass on the knowledge and learnings gathered from my years in France and around rugby environments.

“The Pacific Rugby Players team have provided outstanding support for our players across the world for many years, so it’s an honour to be a part of the organisation. Marion has considerable experience in French rugby circles alongside huge passion for the Pacific Islands, so we’ll make a great team”. 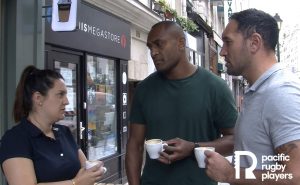 Over 400 Pacific Island rugby players are currently based in France and supported by PRP.

Pacific Rugby Players CEO Aayden Clarke is delighted to welcome Rokocoko on board: “The support of a Player Relationship Manager offers massive benefits for both current and future players.”

“To welcome Joe to our team is a huge win; he’s a proud Pacific Islander and Fijian with huge experience in the professional game – not only with the All Blacks but playing professionally in France.

“He has vast experience to pass on and for a long time he’s been helping Pacific Island players arriving in France out of the goodness of his heart; now he has the additional resources of our organisation behind him.”

“Junior, Marion and Joe all understand the challenges and pressures players face overseas and are committed to ensuring we help as many as possible reach their very best potential in life and rugby.”

An International Rugby Players member association, PRP has supported many rugby players both in the Pacific and overseas since its inception in 2013.

As well as being the official representative of the players of Fiji, Tonga and Samoan in contractual and legal issues, the organisation offers a comprehensive education programme in the Pacific Islands to prepare players for life overseas and in professional rugby, aided by International Rugby Players who deal directly with World Rugby on global issues that concern players from the Pacific and beyond.