Sevens Players have their say as Global Survey revealed

An International Rugby Players Sevens survey has highlighted the benefits of an additional player to squads but has raised player welfare concerns around the series.

The study, conducted across all 15 core teams on the World Rugby Sevens Series this year, also revealed that the majority of players favour a second-tier tournament to develop the game.

With almost 90% of the men’s player base responding to questions, the study is the most comprehensive undertaken in recent years. It’s been submitted to World Rugby as the governing body gets set to choose the venues, cities and tournament structure for the next four-year Sevens cycle. 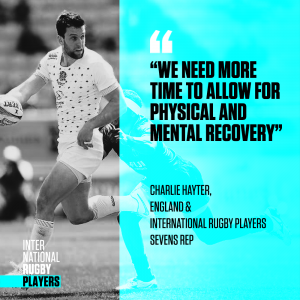 The findings have been presented to World Rugby and will form the basis of discussions with the governing body to further improve the Series for all stakeholders over the next four-year cycle.

International Rugby Players CEO, Omar Hassanein said: “While most players are happy with the layout of the Sevens series, there are still areas that need to be addressed.

“We work on an ongoing basis with World Rugby to ensure that the players’ voice is heard. Player welfare, schedules, recovery and travel are all major issues for our members and we need to make sure that, along with getting the economic model correct, player welfare is to the fore, so that everyone can benefit.”

The survey also gave a much-needed insight into the pay and conditions of players, with 16% of men on the series describing their status as ‘amateur’ and 20% also holding a part-time job to supplement their income. Close to 60% of players play Sevens on a full-time basis.

While players are generally happy that they take the most direct routes to cities, many raised concerns about the effects on performance of flying long distances in economy class, citing injury concerns. One player said: “You have to appreciate that it’s hard for a rugby player to squeeze into an economy seat for 24 hours and be expected to train and perform as soon as they land.” 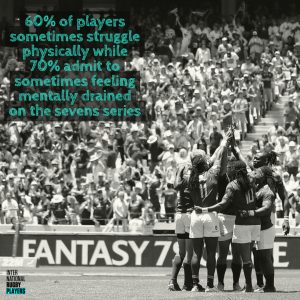 England player Charlie Hayter, who sits on the International Rugby Players Sevens Group said: “We need to get the season structure right. The number of tournaments is not the issue – we love playing the game.

“However, we need more time before tournaments to allow for mental and physical recovery. Four weeks recovery between tournaments, without travel, should be a bare minimum and a general standard of travel over long distances would be a huge step forward for the game.”