Winning World Cups: “Learn to deal with the unexpected”

Conrad Smith knows a thing or two about winning Rugby World Cups because, well, he’s won two of them.

The former All Black centre was part of the team that claimed the William Webb Ellis trophy in 2011 and again in 2015.

Speaking to us from his home in Pau, the Taranaki native, who now balances his time between International Rugby Players and his coaching duties with the Top 14 club, talks about the dark days in the aftermath of New Zealand’s early exit from RWC 2007, rebuilding the squad, keeping faith in Graham Henry and Steve Hansen and the pressures of playing in a World Cup on home soil.

But his main message? Dealing with the unexpected.

“Looking back on our failures at previous Rugby World Cups – it wasn’t because we weren’t prepared – if anything we were over prepared,” said Smith.

“But we weren’t dealing with the unexpected, which World Cups throw out. You have teams playing better than they ever had. We were getting surprised. Suddenly, teams that we’d beaten in the run-up to a World Cup were producing footy we’d never seen.

“So if there anything we were gonna do this time, it was to prepare for abnormalities. For teams to play out of their skin, for referee calls to not go our way, for the weather or for injuries.

“We said before that we would never guess how it’s gonna go wrong, but it will go wrong! And it proved to be correct – we never talked about three first-fives (out-halves) getting injured or for Mils Muliaina to go down (injured)!

“Suddenly I was the most experienced back – and that kept me awake at night, I can tell you! But instead of getting nervous, we just said “this is what we talked about.” 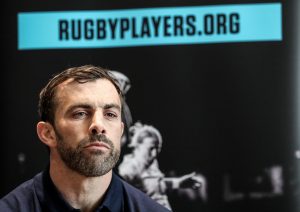 The former Hurricanes star also speaks about how they viewed hosts England as a major threat going into the 2015 World Cup, how the squad was managed in a bid to get the best out of the players and gives his views on whether an All Black team can win back-to-back Rugby World Cups again.

Check out more from our range of interviews and Podcasts on Spotify, Soundcloud and YouTube now!