Along with calls for clarity on the future of the Women’s 15s game, today’s Global Women’s Survey gives us an insight into the type of player that’s competing at the elite level.

Players from all Women’s Sevens Series core teams as well as those that competed at last year’s Women’s Rugby World Cup took part in the study.

Demographic of the Global Game:

The majority of players (70%) started playing rugby in their teenage years and players were generally introduced to the sport by friends, in university or through high school initiatives.

42% of players say they can live off their income from Rugby although this standard of living is categorised as “surviving” rather than living.

60% of those receiving income from their participation in rugby are also supplementing their income with another job while just over one-third of the players are students, the majority of these (70%) in the 18 to 23-year-old age bracket. 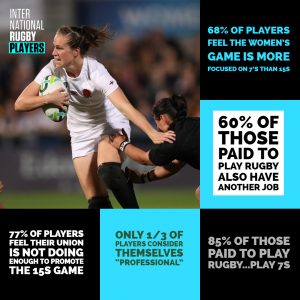 One of the stand-out findings from the survey is that 68% of players felt that the Women’s game globally is more focused on Rugby Sevens rather than the traditional 15s version of the game.

From a participation perspective, over half of the athletes playing women’s rugby (52%) play both codes while 21% are 7’s specialists and 27% are 15’s specialist players.

Notably, 85% of those receiving any pay for playing Rugby are participating in the 7’s version of the game. Of the specialist 15’s players, only 15% are receiving any income from the sport.

75% of players in the 15s code feel there is not enough games for their country. Interestingly, the remaining 25% are from the European region who have the benefit of the 6 Nations competition. 77% of players globally feel that their union is not doing enough to promote the 15’s game. 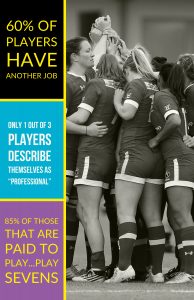 Overall, there is a real fear for the future of the 15’s game among players, as the extended funding models available for Sevens means that is where the high-performance investment is going, while some nations are also utilising the same players to ‘top-up’ their 15’s programmes, particularly in World Cup year.

Workload of a modern player

Training load seems to be the real issues, due to the irregular timings of tournaments where players are under-trained or even over-training in order to fulfill contractual/funding requirements.

One player said: “There’s too much training for the actual games played. The ratio of training to playing is all wrong. Months go by without a tournament.”

Factors affecting mental load include the stress of satisfying employment requirements while committing to their respective national programme. Annual leave is used for training and tournaments, meaning players don’t get the break they need to mentally recover.

Many programmes are inflexible with time commitment so jobs are often sacrificed and many feel they are putting careers on hold in order to participate in the game.